Researchers and manufacturers caution against prolonged use of the air polisher on cementum and dentin. When moderate to heavy stain is present on root surfaces, dental hygienists are often faced with the problem of removing it with the least alteration of cementum.

One choice is to leave the stain and explain to the patient that stain is not associated with oral disease and will not harm the teeth or gingiva since it is only a cosmetic concern. To many patients, this is not a viable choice since appearance is considered so important in today's society.

Other choices include removing the stain with a rubber cup polisher and prophylaxis paste; sonic, ultrasonic scalers; Dental Hand Instruments or the air polisher. Wilkins recommends removing as much stain as possible during root planing with curets. However, in one in-vitro study, air polishing was shown to remove less root structure than a curet in simulated three-month recalls for three years. Woodall agrees that the air polisher may be preferable to curets in this situation. Since less root structure(endo equipment) is removed, decreased root-surface sensitivity also may be a benefit.

Air polishing units typically generate a stream of pressurized air, carrying specially graded particles of a mild soluble abrasive, such as sodium bicarbonate. The abrasive is directed, in the presence of a stream of water, at a tooth surface to be cleaned. The mixture of water and powderladed stream occurs on the tooth surface and forms a “slurry” that is responsible for the cleaning action.

Effects of air polishing on gold foil, gold castings, porcelain, amalgam, and glass ionomers have been studied. Air polishing of amalgam alloys and other metal restorations has produced a variety of effects, including matte finishes, surface roughness, morphological changes, and structural alterations.
Posted by Lucas Lee at 12:58 AM 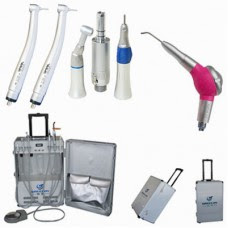